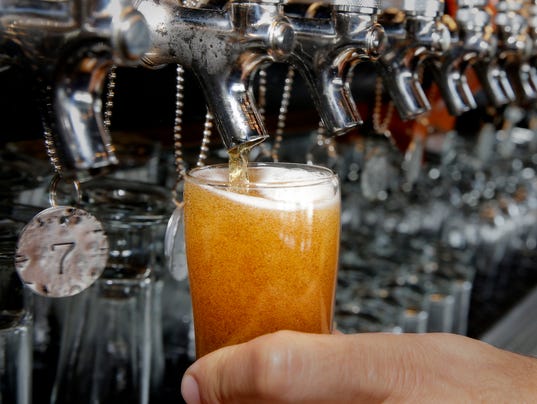 The best way to learn what kinds of beers you like is to just grab a glass and try them out.(Photo: Rick Wood / Milwaukee Journal Sentinel)Buy Photo

It’s a better sign of spring than robins or baseball season: The first beer garden from the Milwaukee County Parks Department opens for the season on April 12.

South Shore Terrace Kitchen + Beer Garden — Home of Miller 1855 Bar will open with a ceremonial keg tapping at 4 p.m. and free beer and root beer while supplies last. Bluegrass band Noah John and Ringing Iron will perform from 4 to 8 p.m.

Beverages include on-tap beers served in souvenir glass pints and steins, which can be refilled at a discount at the Miller 1855 Bar, any of the Parks Traveling Beer Garden stops, and the Whitnall Park Beer Garden, tentatively scheduled to open April 21.

Items may be purchased with cash only.

New seating has been added to the pavilion. Eight tables and 16 benches were custom made for South Shore Terrace from spent quarter barrels provided by MillerCoors and felled ash trees from the Milwaukee County Parks Department.